There is no gainsaying the fact that prior to the assumption of the mantle of leadership by Governor Ifeanyi Okowa, the wet season was one that residents of the Delta State capital city of Asaba and environs looked forward to with much anxiety and trepidation.

Delta was created from the defunct Bendel State on August 27, 1991 but since the advent of the current democracy in Nigeria in 1999, Asaba, the state capital has witnessed an influx of people from different parts of the world, which inevitably put a lot of pressure on the available infrastructure, including roads and the drainage system. 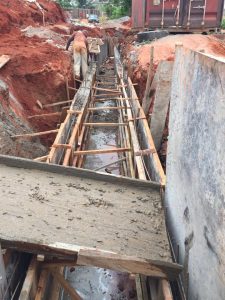 Today, no matter the magnitude of the rain, people can drive through major streets of Asaba without fear of being washed away by giant flood. One significant thing about the drainage projects is that they go with well tarred roads.

Yes! We certainly cannot forget where we were less that five years ago, and thus give accolades to the governor for taking what appeared like a huge risk that has yielded positive results.

That Asaba is fast growing into a sprawling modern city would be an understatement; and, it will take the whole resources of the state to meet with the demands of social amenities needed in most of the areas being opened up in Okpanam, Oduke, Ugbolu, Ibusa, Issele-Azagba and so forth – adjoining communities that make up the state’s capital territory.

Just before the Specialist Hospital, Asaba, is a wide road where the Christ the King Catholic Church is located and, shortly after the church, one cannot miss a drainage project currently under construction. Obviously, flash water from Okpanam area has made the street impassable, which elicited the construction of the drainage.

One would readily take the project for one of the numerous ones being executed by the Delta State Government because of its size; that is, the dept, width and length of the drainage. But on inquiry it was discovered to be a project embarked upon by an individual! That discovery aroused my curiosity, and further inquiry led me to meeting a man with a golden heart, Dr Sunday Okonji, who revealed how he had for more than three years singlehandedly undertook the grading of the roads in the area to make them passable for the people. He said that constructing the drainage became inevitable to ensure that those who live in the area were not further endangered by the volume of flash water and flood passing through their compounds and the main street.

Considering Dr Okonji’s uncommon initiative, it stands to reason that the area will not be long in getting government attention, in terms of attracting necessary infrastructure as such would go a long way not only in scaling up socio-economic activities in the area, but would enhance the security of lives and property of the people.

In a chat, the businessman and philanthropist said, “The drainage is more that 700 metres long and meant to channel water through Ojogho Street, Agbami community, which is close the the Christ the King Catholic Church, Okpanam.

“As you can see, the area is having serious ecological challenges. Apart from the flooding, which made the area inaccessible even by foot before my intervention, houses are being threatened by erosion. I have discussed with relevant authorities but they have not been forthcoming in terms of needed solution which prompted me to undertake some intervention in controlling the erosion, before those buildings cave in.

“The major problem of people living in this area is lack of access road resulting from flooding and the ecological problem, which was apparently worsened by quarry activities.

“For the past three years, I have been the person grading the road up to the Catholic Church, Agbami community linking Midwifery road, for people to have access to their homes.

“I live in the neighbourhood and the area has a shopping mall, gas plant, petrol station and a school that can employ more than 200 Deltans. So, I can appreciate the vast socio-economic benefits of having access roads in this area.

“As we speak, the Bank of Industry (BoI) has already approved the establishment of a glass and PVC making company in the area; but we require government’s intervention too.

“Already, a police post has been approved for the area which I have chosen to personally build in the next few weeks.

“Last December alone, grading and filling of the gullies took more than N1 million from me; and, considering the width of this drainage, government should come to our aid to make it a fully covered drainage and to construct the roads. We have construction companies that have indicated interest to construct the roads with their resources if government agrees to pay at a later date, because we are aware that the Delta State government led by Senator Dr. Ifeanyi Okowa is doing a lot to make life better for Deltans.

“We all need to contribute to the development of the state by assisting the government, which has good intentions for the people. I can tell you that we are happy to embark on these projects despite the fact that people believe it is the responsibility of government to execute such projects because of their huge cost implications,” he said.

It is impossible for government to provide all the facilities needed by the people and there is the need for people to contribute to the development of the society. Therefore, the contribution of Dr Okonji, a successful businessman who hails from Onicha-Olona in Aniocha North Local Government Area, should inspire more Deltans to contribute to the development process in the state, in line with the commendable pace set by Governor Okowa.

The benefits of living in a good environment cannot be quantified; creating an environment that is neat and clean only translates to a healthy environment admired by residents and visitors.

With what the Covid-19 is doing around the world, especially its negative impact on world economies, we can only hope to limit its adverse effects on our own environment if we stay at home, observe social distancing and others; and if we can identify certain areas we can assist in making our neighbourhood better. By attracting a police post with all amenities, Dr Okonji will by no little measure boost the security in that neighbourhood. It is no wonder the Bank of Industry had readily given approval for the construction of glass and PVC manufacturing company in the area.

Needless to say, removing more than 200 persons from the labour market with its multiplier benefits speak volume, considering the fact that the Nigerian situation compels an employed individual to cater for not only his immediate family but extended family as well as a retinue of other relations and friends. It will certainly contribute a lot to the posterity-for-all-Deltans programmes of Governor Okowa.

There are many well-to-do Deltans who are contributing immensely to the development of the economies of other states and even other countries of the world. The time to come home or plow back is now. Delta is ranked second least poor state in Nigeria by the Nigeria Bureau of Statistics. It has two functional airports in Asaba and Osubi near Warri and, with more than four seaports that can be revived in Burutu, Warri, Koko, Sapele and Oghara, even some countries in the world would want to have what Delta State has. And, of course, the state can also be accessed by land and it is the closest neighbour to the biggest commercial centre in sub-saharan Africa, Onitsha.

Dr Okonji may not have so much as some Deltans, but he has keyed into the vision of the Okowa administration by contributing to the growth of the society. There is no doubt that with Deltans utilising the investment-friendly environment so enhanced, the internally generated revenue will get a boost with more persons being employed.

From Asaba to Kwale, Agbor, Ughelli, Warri, Sapele and other towns and cities across the state, it is like a virgin area beckoning on potential investors desirious of quick returns on their investments.

That Governor Okowa has worked creditably well in winning the confidence of well-meaning Deltans as evident in the actions of Dr Okonji and several others, who are contributing to the development of the society silently, is not in doubt.

God bless you all as we strive for a better society, achieving the Delta of our dreams where things work and where people are their brother’s keeper.

Driver Escapes As Car Catches Fire, Another Rams Into Bush

Driver Escapes As Car Catches Fire, Another Rams Into Bush