by NewsDen Publishers
in NEWS
0

At the ceremony which took place at Government House, Asaba on Monday, the governor charged political appointees to justify their appointments by bringing innovative ideas and strategies to bear in the discharge of their duties. 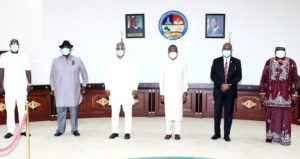 He said that the new advisers were men of great pedigree in politics and governance, and were expected to bring their wealth of experience into governance as the state continued to wade through the fog of uncertainty occasioned by the global COVID-19 pandemic.

He charged them to discharge their responsibilities in accordance with section 196 (Sub-section 1) of the 1999 Constitution of the Federal Republic of Nigeria (as amended), and to work selflessly for the good governance and development of the State.

According to him, Emma Ogidi and Sunny Emeyese have been part and parcel of our political journey since 1999.

“They have proved themselves to be men of insight, competence, probity, and firm believers in the advancement of the collective good of our people, ever-willing and ready to contribute their quota to the growth and development of Delta.

“Messrs Ogidi and Emeyese have never shied away from the call to serve, notwithstanding the office ascribed to them. It speaks volumes of their faith, loyalty, commitment, and sincerity of purpose.

“I am persuaded, beyond any shadow of doubt whatsoever, that this administration stands to benefit immensely from their wealth of experience, wisdom and political sagacity. In the unusual times that we live in, we need every capable hand on board.

“Let me reiterate the fact that Special Advisers occupy a distinct role in our modern democratic setting. We need them for their expert policy inputs and ability to marry politics and policy to actualise the administration’s vision of a Stronger Delta anchored on Prosperity, Peace and Progress.

“To the new appointees, I charge you to discharge your responsibilities in accordance with section 196 (Sub-section 1) of the 1999 Constitution of the Federal Republic of Nigeria (as amended).

“Having been part of our S.M.A.R.T agenda, I believe you are sufficiently acquainted with the key policy thrusts of this administration, hence I expect you to hit the ground running,’’ he said.

Okowa pointed out that his administration had less than three years to fully deliver on its mandate, and remarked that the disruption caused by COVID-19 had placed a demand on citizens to work with a greater sense of urgency, unflagging enthusiasm, more creativity and innovative strategies,” he said.

According to him, every citizen, including appointees, needs to work assiduously to make up for time lost during the lockdown.

The governor charged the appointees to be fair and just in the discharge of their duties.

“I urge you to make fairness and equity your watchwords in the discharge of your duties. Public servants constantly come under the pressure to give preferential treatment to their kith and kin, but you must guard against such nepotistic considerations.

“While you are expected to be very active and contribute meaningfully to your immediate constituency, you must also realise that your obligation is to the good people of Delta, irrespective of their ethnic nationality, party affiliation, socio-economic status, or educational background.

“Having known both of you for a considerable length of time, I am confident you will justify the confidence reposed in you by this appointment,” he added.

Ogidi responded on behalf of the new advisers and thanked the governor for considering them worthy to be part of the team to build a stronger Delta.

He told the governor that they identified with his vision and would work with him to attain the desired objectives of his administration.