They spoke glowingly about why Obaseki should be re-elected as Governor based on his sterling performance in his first four years in office.

Speaking at Samuel Ogbemudia Stadium, Benin City, Edo State on Saturday at the flag-off of the PDP governorship campaign for the forthcoming gubernatorial election in the state, Okowa emphasised that Obaseki did very well in his first tenure and as such, deserves to continue with the delivery of dividends of democracy for the next for years. 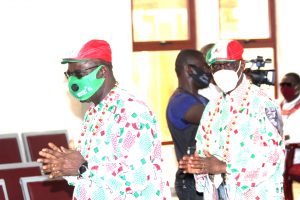 “As the Chairman of the South-South Governorship Forum, I am a happy man because PDP is back to Government House in Edo after 12 years.

“I want you all (the people of Edo) to work hard to retain it and I congratulate you all on this bold step,” Okowa who is also, the Governor of Delta State said.

National Chairman of the PDP, Prince Uche Secondus, stated that Obaseki did exceptionally well in the first four years to deserve re-election.

He urged the people of Edo State to use their voters’ cards wisely by voting for the PDP logo which signifies re-election for Obaseki. 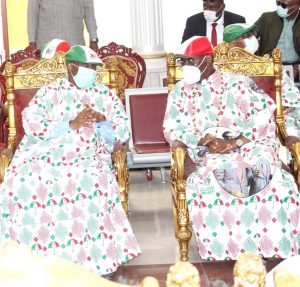 Also at the rally, Chairman of the PDP National Campaign Council for the election, Governor Nyesom Wike of Rivers State, implored eligible voters in the state to vote against political god-fatherism, pointing out that they should defend their votes.

While noting that Governor Obaseki had endeared himself to the people of Edo, Wike urged the people to return him for a second tenure so that they would continue to enjoy the dividends of democracy being churned out for them by the governor.

Others who spoke at the well attended rally were Governors Aminu Tambuwal of Sokoto State, Bala Mohammed of Bauchi State and Seyi Makinde of Oyo State and they all justified why Obaseki should be re-elected.

Speaking at the event, Governor Obaseki expressed appreciation to Governor Ifeanyi Okowa and other PDP stakeholders that gave him the opportunity to become the flag-bearer of the party for the forthcoming governorship election in the state and promised to consolidate on his achievements when re-elected.

Obaseki assured the people of the state that his second tenure would continue to address their basic challenges in the area of infrastructure and human capital development.

High point of the rally was the presentation of the PDP flag to Obaseki and his deputy, Comrade Philip Shuaibu by Prince Secondus.