Reflecting On Death, Will Make You Prepare For Eternity, Says Fr. Edward

REV. Fr. Steve-Mario Edward has called on Christians to always reflect on death as such will make them prepare for eternity.

He made the call on Wednesday in a homily delivered during the vigil Mass for Mrs Eunice Ifeajika, mother of the Chief Press Secretary to Governor Ifeanyi Okowa, Mr Olisa Ifeajika.

The Mass was celebrated at St. John the Evangelist Catholic Church, Ogbe-Obi quarters, Illah, Oshimili North Local Government Area of Delta State. The deceased passed on at the age of 84 years.

“People should feel sober, have time to reflect on death as a fate that will befall all mortals.

“Think about how many funerals that you have attended this year,; think about those you have visited to say, ‘accept our condolences’; knowing that we will give account of ourselves on the last day will make us live a better life because, death is certain.

“She was 84, and we thank God for her age; it is not everyone that has the privilege of living till 80. 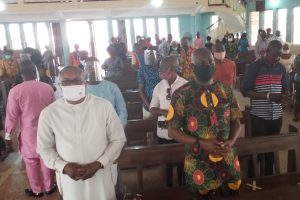 “We should know that the owner of our life can call for it anytime; so, each time we come for funeral, we should reflect on our life and know that after death, judgement, which means means giving account of our life.

“Suppose God calls you today, what will be your situation?

“Let us have relationship with God because, today, we have come to bid our sister, our mother farewell, we don’t know who we will bid farewell tomorrow; we should try and be merciful, compassionate, so that on the last day, God will be merciful on us.”

Senior Political Adviser to Governor Okowa, Rt. Hon. Funkekeme Solomon, was among those that attended the vigil Mass.