YOUTHS of Ndokwa ethnic nationality, Delta State, blocked major roads that passed through their area on Thursday morning to drum home their demand for Federal Government’s presence in the area. 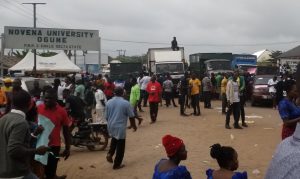 As a result of their actions, travellers passing through the area were seeking alternative routes while most of them were seen hoping that government will intervene and allow free flow of traffic.

The youths, under the aegis of Ndokwa Neku Union (NNU) Youth Wing had given a 14-day ultimatum to the federal government, listing areas that need urgent attention.

MANAGEMENT DISCUSS WITH SAB: The Challenge Of Management In A COVID 19 Crisis