MEMBER Representing Isoko South II Constituency in the Delta State House of Assembly, Chief Ferguson Onwo has said his choice for knowledge-based empowerment programme for youths in the constituency was geared towards making them economic giants.

Onwo made the statement during the presentation of certificates to 38 youths trainees and cheques to facilitators of the programme he initiated for the training of youths in different agricultural areas at the Bio-resources Development Centre, Odi, Bayelsa State. 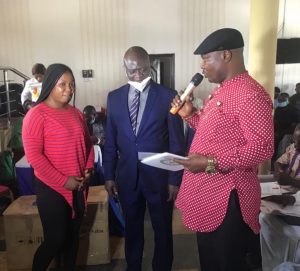 According to him, the training programme which was done under his Okpobrisi Sustainable Development Scheme, was a shift from the buying of Motorcycles for youths as empowerment, instead of equipping them with skills in sustainable ventures.

The lawmaker disclosed that during his electioneering campaign, he made promises to touch the lives of the people positively by empowering youths and women as well as attracting development projects to the constituency. 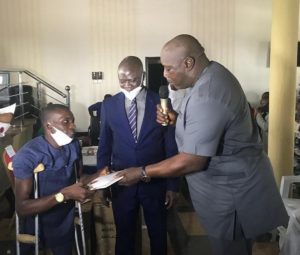 “I decided to move beyond empowering youths with motorcycles and other items that can be sold to a knowledge-based empowerment through trainings in order to give the trainees a platform to become employers of labour,” he said.

He noted that the thirty eights youths were trained at the Bio-resources Development Centre, Odi in Bayels State in the areas of snail farming, fishery, grass cutter husbandry, macro propagation of banana, plantain and mushroom production, maintaining, “the trainees were being empowered with all they required to start their own farms without giving them the cash”. 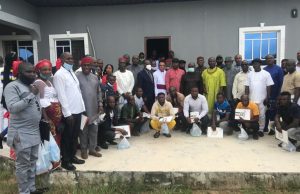 Hon Onwo announced that the funds for the establishment of the farms and provision of suckers, fishes, snail among others have been made available to the facilitators and the Bio-resources Development Centre, adding that the trainees would be closely monitored.

He congratulated the graduating trainees and expressed satisfaction with their level of commitments and performance, even as he charged them to put to good use knowledge acquired in the course of the training.

Delta State Commissioner for Agriculture and Natural Resources, Chief Julius Egbedi, commended Hon. Onwo for the training program, stressing that the Ministry was willing to partner with elected and political appointees who wants to empower their constituents through agriculture.

Also speaking the State Commissioner for Youth Development, Mr Ifeanyi Egwuyenga said Hon. Onwo has redefined empowerment by taking it to a sustainable level, adding that it was in line with the STEP and YAGEP programmes of the state government..

For his part, the Chairman of the People’s Democratic Party, Delta South Senatorial District, Chief Julius Takeme who lauded Hon. Onwo, said he has given the youths permanent empowerment and urged the people to continue their support for the state government and the party.

Officials of Bioresources Development Centre, Odi, Bayelsa State including the Head of Administration, Mrs Ada Anulobi and Head Bio- Entrepreneurship Training, Mr Tawov Hezekiah said the training of the youths in the Centre was a wise choice and promised to provide technical support and markets for their products .

Some of the beneficiaries who spoke including a physical challenged graduate, Mr Esume Emmanuel thanked the lawmaker for the empowerment program, saying it was first of its kind in the area and promised not to disappoint him.

The highlight of the event was the presentation of different cheques amounting to ten million naira to the facilitators who were empowered to set up the farms for each of the trainees.

Presentation of certificates to the beneficiaries were performed by dignitaries present, where the member representing Isoko South one in the State House of Assembly, Hon Kenneth Ogba, gave the physical challenged trainee, Esume Emmanuel two hundred thousand naira for participating in the program.