Foreigners Are Paying For Gold With Arms, Says Zamfara Gov

GOVERNOR of Zamfara State, Bello Matawalle has said terrorists were having access to arms through the intrumentality of foreigners who pay for gold with arms.

The governor made the revelation after meeting with President Muhammadu Buhari on Monday night in Abuja. 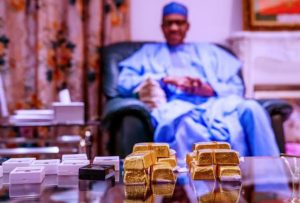 “Zamfara State is blessed with many mineral resources and some people outside the country come in to buy gold and other precious stones and sometimes instead of paying the people, they pay back with arms

Pope Appeals To Putin To End ‘Spiral Of Violence’ In Ukraine

“I did some investigations, and the state government has decided to be buying some of these minerals so that we can block that chain. 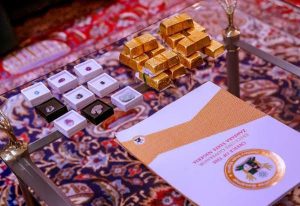 “So now, the state government is engaging the miners, we will be buying some of this gold from them with the limited resources we have.

“We came to show him (Buhari) how the states profit from illegal miners, especially in the bush and he has seen what we have.

“We have so many cases of gun running in Zamfara State.

“The President is very happy with the system we have initiated and he said whatever support the state government needs, the federal government is ready to assist us. 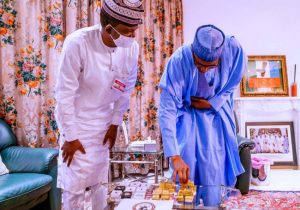 “I came to brief him on so many issues that have become source of worry in my state particularly the issue of illegal mining that is taking place everyday.

“Three days ago, we discovered large deposit of gold in our state where the locals are trooping in thousands to do illegal mining.

“So, I came to seek his advice on how best we can tackle the issue of illegal mining.

“He gave me all the support and in a few days, people of Zamfara will see a lot of changes especially in mining sector.

“First, we want to strengthen local miners, we want to identify them and make them like a cooperative society so that they can be benefiting from mining.

“The President understood our plight and we have the issue of Presidential Artisanal Gold Mining Development Initiative (PAGMI).

“It is already ongoing and they have done it in some other states.

“Zamfara State is going to benefit from this PAGMI programme very soon.

“When I go back, we will set up a committee on PAGMI so that they can go round and the government and CBN (Central Bank of Nigeria) will be buying from us directly.

“It is better they are selling it very cheap in the mining areas.

“The federal government, CBN and state can come in and be buying from this small scale miners.

“We now have gold refinery in the state, which is being built in Baka Lori Dam.

“We also have another equipment that is coming; we want to make Zamfara a model in terms of solid minerals and I assure the people of the state that within two to three months, we will go into full scale mining.

“As you have been hearing before, now the narration has changed.

“You won’t be hearing of mass killings in the state because the security agencies are doing their best.

“I equally advised the president that the call for the sack of the service chiefs is not the solution.

“Let us support the security and we as the governors, we have a big role to play.

“We just have to support the security agencies no matter what.

“If the governors are not serious, they can’t be able to achieve what they want.

“I advised the President that all those calling for the sack of the security chiefs should rather think of the best way to support them to perform better instead of sacking them.

“Even if you sack them, you are bringing another ones.

“So, let us use the one that we have; we will support them as a government, my state now is at peace and everybody is aware.

“We have the security, it’s just for us as leaders to support them.

“I believe we will see a lot of changes in terms of security in this country.”

“What the President said was that we would look for serious investors that will come to the state.

“He even advised me that I should liaise with South African and Russian mining companies so that we can partner with the state and federal government to achieve much more.

“I assure you within limited time, once the ban is lifted, I will travel to South Africa to see some companies and make some assessments and they will follow me to come and see what Zamfara has.

“He also advised me to see a lot of people. He gave me a fatherly advice and I was happy with the advice he gave me,” the governor said.

Tips On How To Start Fast Food Business In Nigeria

Tips On How To Start Fast Food Business In Nigeria