A middle-aged woman was on Wednesday morning, crushed by a hit-and-run driver at Okpoko junction, Onitsha, Anambra State.

The deceased whose identity could not be ascertained, was said to be crossing the expressway around 8 am when she was knocked down by the driver who was on top speed.

Newsden gathered that the driver sped off immediately, leaving the victim lying lifeless on the ground.

In a related development, ten persons were seriously injured in another accident that occurred along Ihiala-Onitsha Expressway.

The accident which occurred at about 8.20am, involved a Toyota Hiace and an Actros Tanker. 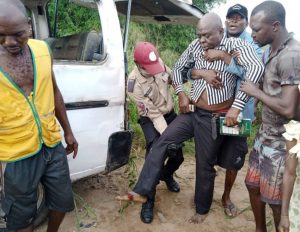 Sector Public Education Officer, Federal Road Safety Corps (FRSC), Mr. Pascal Anigbo who confirmed the reports, said the corpse of the woman was deposited at the hospital morgue where the body was rushed to.

“A hit-and-run driver whose identity was not captured, knocked down a female adult who was crossing the expressway at Okpoko Junction Onitsha, today Wednesday 12 August, 2020.

“The victim was rushed in a Tricycle to Toronto Hospital, Onitsha by her parents, before the arrival of the FRSC rescue team from Upper Iweka Unit Command.

“On arriving the hospital, the team gathered that doctors had confirmed her dead.

“The corpse was deposited at the morgue, in the same hospital,” he said.

While disclosing that no death was recorded in the second crash, he said the injured were rushed to Our Lady of Lourdes Hospital, Ihiala, by FRSC rescue team from Ihiala Unit Command.

“The Sector Commander, FRSC, Mr. Andrew Kumapayi strongly warns road users against crossing the expressways, but to always use pedestrian bridges to avoid being knocked over by vehicles plying the expressway.

“He also warns drivers against speeding.

“Drivers should always drive with common sense speed limits so that they can easily control their vehicles, in the event of any emergency.

“A maximum speed limit of 50km/hour is recommended for cars, within built-up areas. He sends his condolences to the family of the deceased and wishes the injured victims quick recovery,” Mr. Anigbo added.

BY SUNNY A. DAVID

Police Vow To Fish Out Killers Of Governor’s Aide