Reactions As President of Mali Resigns

by NewsDen Publishers
in AFRICA, NEWS
0

REACTIONS have continued to trail the forced resignation of the President of Mali, Ibrahim Boubacar Keita.

Keita had on Tuesday, resigned and dissolved parliament hours after soldiers detained him after a successful military coup.

Organisers of the military coup, the National Committee for the Salvation of the People (CNSP), Malian Air Force Deputy Chief of Staff, Ismael Wague, had said in a state television broadcast that they would enact a political transition and stage elections within a “reasonable time.

“We decided to take responsibility in front of the people and of history.”

Keita who was looking tired and wearing a surgical mask, in a brief address broadcast on state television hours after troops seized him along with Prime Minister Boubou Cisse and other top officials, said, “If today, certain elements of our armed forces want this to end through their intervention, do I really have a choice?

“I want no blood to be spilled to keep me in power.”

Most government officials have fled their offices in Bamako as armed men began detaining officials, including the country’s Finance Minister,  Abdoulaye Daffe.

Chairman of the African Union Commission, Moussa Faki Mahamat, in his reactions, said, “I forcefully condemn the arrest of President Ibrahim Boubacar Keita, Prime Minister and other members of the Malian government, and call for their immediate release.”

President Muhammadu Buhari was on Tuesday, briefed by his immediate predecessor, Dr Goodluck Jonathan, on the Mali crisis at the State House, Abuja. 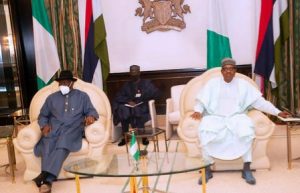 Special Adviser to the President on Media and Publicity, Mr. Femi Adesina, in a statement after the briefing, said Jonathan, who is ECOWAS Special Envoy to the Republic of Mali, briefed Buhari on the political crisis in the West African country, as parts of efforts being made by West African leaders to restore stability to the country.

“Dr Jonathan, who is ECOWAS Special Envoy to the Republic of Mali, briefed on the political situation in the West African country, as corollary to efforts by West African leaders to restore stability to the country.

“President Buhari and four other ECOWAS leaders had visited Bamako, Mali, last month, followed by a virtual extraordinary summit of the sub-regional body.

“Dr Jonathan, who was in Mali from Monday to Thursday, last week, recounted his meetings with the stakeholders, including political and religious leaders, Ambassadors of US, France, Russia, Germany, European Union, and other important personalities key to peace and cohesion in the country.

“The main opposition group, M5, he said, continued to insist on the resignation of President Ibrahim Boubacar Keita, a position not acceptable to ECOWAS, which insisted only on democratic process in change of power within its jurisdiction.”

“President Buhari thanked Dr. Jonathan for what he called ‘the stamina you have displayed’ on the Mali issue, and counseled further consultations with the Chairman of ECOWAS, President Mahamadou Issoufou of Niger Republic.”

French President Emmanuel Macron has been in touch with regional leaders and has called for mediation, the Élysée presidential palace said in a statement.

The United States through its State Department’s special envoy for the Sahel region, J. Peter Pharm tweeted, “The US is opposed to all unconstitutional changes of government whether in the streets or by security forces.”

Pope Francis Calls For Social Justice And Vaccines For All

Pope Francis Calls For Social Justice And Vaccines For All