GOVERNOR Ifeanyi Okowa of Delta State has inaugurated a Newborn Screening equipment for the treatment of sickle cell in the state.

The 05 Initiative of the wife of the governor, Dame Edith Okowa donated the equipment to the Sickle Cell Referral Centre, at the Asaba Specialist Hospital. 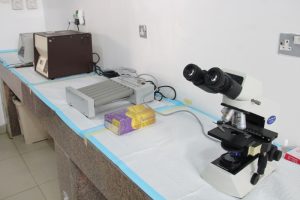 At the ceremony on Wednesday, Governor Okowa said that with the inauguration of the equipment, Delta became the first state in Nigeria to have a “newborn and adult screening machine’’ in one system under High-Performance Liquid Chromatography (HPLC).

He thanked his wife for the vision to assist people with sickle cell disorder, thus assisting the hopeless in the society, and commended the 05 Initiative, which he said had had its drive sustained by donations from individuals and agencies.

He called for appropriate legislation for compulsory test for every newborn child across the country, adding that the government would do everything to support the screening of children across the state.

“Let me congratulate the 05 Initiative for truly impacting on the lives of our people in several ways. I have witnessed them do a whole lot of things for children, women, and the less privileged. 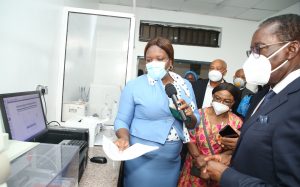 “They have gone further to reach out to our brothers and sisters in the prisons and I believe that beyond what they give, the fact that they carry out evangelism to the prisons will help make those people better citizens when they come out. 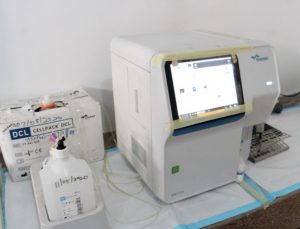 “We must continue to recognise all those that have donated to this course. A lot of people now have hope that they can be attended to, because if you see the children that suffer from this disorder, they are usually in severe pains and their parents do not have the money to treat them.

“Nigeria is the headquarters of sickle cell disorder globally and unfortunately we have not paid more attention to the fight against the disease. It is important that we screen them early enough to prevent them from dying needlessly.”

“We need to come out with an appropriate legislation that will enable us to make it compulsory for every child that is born to be tested and there is a need to work on this. And I believe that those who have given support will continue to do so and in this regard whatever the government ought to do to also offer support to ensure that screening is done for our children, we will try to do our best.

“It is in the best interest of this nation to attend to them early enough because a lot of them die within the first six months to one year because we have failed to recognise that they are suffering from sickle cell disorder and we failed to attend to them.

“It is important that somebody ought to be the role model and I believe Delta State is able to do so, just as we have become the role model in the issue of health insurance to our people.

“Currently we are approaching the one million mark, but it is our hope that we will be able to scale up our health insurance scheme to the two million mark as we approach 2023,” the governor stated.

Earlier in an address, Dame Okowa had said “the inauguration of the newborn screening machine was a dream come true’’.

She expressed gratitude to God for testimonies coming from patients at the various sickle cell centres across the state and commended the health professionals at the centres for being compassionate caregivers.

The governor’s wife commended Governor of Central Bank of Nigeria, Mr Godwin Emefiele and the member representing Ika Federal Constituency at the House of Representatives, Mr Victor Nwokolo, for donating the money used for the purchase of the equipment.

“Today’s event is exceptional because we added important equipment to the number of machines that we have acquired at the very onset. The newborn screening machine will help to determine the genotype of the babies at birth and this is indeed a dream come true for the 05 Initiative family.

“Beyond visiting the sick which is part of the mission of the 05 Initiative, we are convinced that people living with sickle cell disorder can live a normal life once they access the health care provided by professionals and compassionate caregivers.

“I am confident that the use of these facilities will reduce the stress of mothers and to a large extent bring joy to families who are facing this challenge. It is important that we take this advocacy seriously so that people will know their genotype before they marry.”

The Commissioner for Health, Dr Mordi Ononye, had while welcoming guests to the event said that Sickle Cell disorder was a public health problem among blacks, with Nigeria having the highest cases in the world “as one in every four Nigerians has sickle cell trait.

He commended 05 Initiative for donating the newborn screening machine, and stated that it had brought about capacity-building for health workers as it would facilitate early detection of babies affected by the hemoglobinopathies in order to ensure early intervention and reduce the challenges of morbidity and mortality.